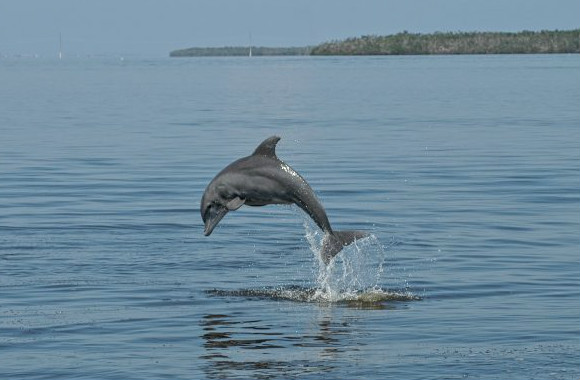 A grant was awarded to Florida Institute of Technology marine biologist Spencer Fire and partners at the Harbor Branch Oceanographic Institute to study dolphin health in light of harmful algal blooms in the Indian River Lagoon. A few summers ago, an algal species not typically known to cause large blooms in the lagoon rapidly spread throughout the estuary and sparked one of the largest fish kills ever recorded on the lagoon. The responsible organism was a cyanobacteria called Microcystis that’s usually associated with fresh-water bodies such as the Great Lakes, not brackish waters as in the IRL. While scientists investigate how this harmful organism was able to flourish in the lagoon in the first place, Fire, an assistant professor of biological sciences, is working with researchers at FAU Harbor Branch Oceanographic Institution on how toxins caused by this organism could affect dolphins and their prey in the estuary. The work is made possible with funding from the Protect Wild Dolphins Specialty License Plate Fund, which is administered by Harbor Branch. “This is brand new territory,” Fire said. “We are really starting from scratch to assess the distribution and concentration of these harmful algal bloom toxins in IRL waters, prey fish and dolphin populations.” Fire and the HBOI researchers will be testing for harmful algal bloom (HAB) toxins in the water, lagoon sediment and animal tissue during non-bloom times to establish a baseline. They will test again when an algal bloom is in effect. Ultimately, the scientists want to determine if there are correlations between toxin concentration and dolphin pathology, and to see if the dolphin food web is contaminated. Dolphins are considered a sentinel species for understanding future health threats to humans. In other words, anything that makes a dolphin sick could harm us as well. Read more on: Space Coast Daily