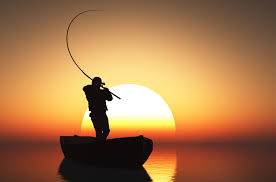 Lake Okeechobee has been severely polluted with phosphorus and nitrates from a century of farming and development around it. Under normal circumstances, in the rainy season, water is supposed to overflow the lake and move south, through the "River of Grass," and give life to the Everglades. But vast acres of sugar farms just south of the lake, and the communities of people who operate them, stand in the way.

To protect that land — called the Everglades Agricultural Area (EAA) — from annual flooding when Lake O fills up, the Army Corps of Engineers sends massive amounts of the polluted water through rivers that run east and west to Florida's coasts, regardless of the damage it does there. Two companies — U.S. Sugar and Florida Crystals, together called "Big Sugar" — own the bulk of the land in the EAA. Environmentalists have long suggested that the state purchasethis land to restore natural water flows, and now fishermen are joining the chorus and making the same demand. But the companies have resisted, while also mastering the dark art of political influence.

The lost summer of 2013 was particularly wet and therefore particularly deadly to the seagrass and the critters on whom Conner's livelihood depended. "My dad taught me that if I believe in something, do something about it," he says. "Don't just bitch. I can't stand complacency. That drives me nuts — people walking around with their head in their ass, watching too much reality shows, then they complain about something."

At a meeting where officials were discussing Lake Okeechobee discharges, Conner confronted a representative of the Army Corps, which controls the water flows. He presented an invoice for the income he had lost.

"I want you to take it to the top," Conner remembers saying. "I want to be reimbursed. I'm out the money." The Corps rep promised to run it up the chain of command. Two weeks later, Conner says, he received an email saying sorry, but because of its flood control mission, the Corps was not responsible for his loss. "So I went on TV with it and publicized it," he says. "I had Channel 12 come out on my boat. I was a lone wolf then. But I wanted to set an example that way. The next year, guys started to think about how things were affecting their wallet."

Three years later, this winter's wet El Niño weather has made things far worse. In a normal year, the Corps sends 92 billion gallons of Lake Okeechobee water into the fragile waters near Conner's home. This year, the agency blasted through that mark in the first four months, and the rainy season still lies ahead. "This may not stop until next winter," Conner says.