Canals Clean Up, Next Water Quality Project For Florida Keys 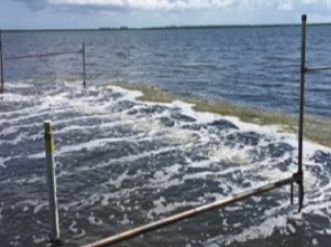 To improve water quality near shore, the Florida Keys has been upgrading wastewater treatment systems and improving stormwater management for 20 years. Next up: Cleaning up the canals that permeate the island chain. 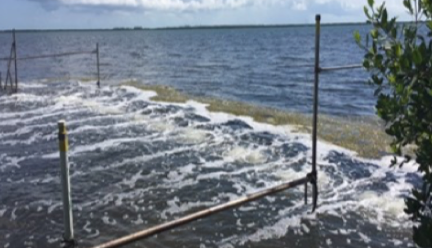 Some canals in the Keys are getting "air curtains" - bubbler systems that
prevent weeds from drifting into the canals. MONROE COUNTY

The canals were dredged to make fill for neighborhoods — and provide water access to those homes. There are about 500 of them throughout the Keys — and about 300 of those don't meet state standards for dissolved oxygen, said Rhonda Haag, Monroe County's sustainability coordinator.

Longtime residents have noticed the deterioration, she said.

Depending on the depth and condition of the canal, the county is taking different approaches to restoring the water circulation. The deepest canals — some are up to 40 feet deep — are getting muck removed and backfilled with gravel.

Dead-end canals are being connected to other waterways with culverts. And some canals that get a lot of weeds and biomatter washed in are getting "air curtains," basically bubblers along the mouth of the canal that push the weeds away.

The total cost to clean up all the canals that need it is estimated at $600 to $700 million. The county plans to use part of its share of the BP settlement from the Gulf oil spill toward that, as well as other help from the state and federal governments.

But the maintenance of the restored canals will be paid for by the property owners who live on the canals. That annual cost ranges from nothing, for backfilled canals, up to $797 a year for the air curtain systems.

So far the county has worked on six canals as pilot projects to test the different methods.