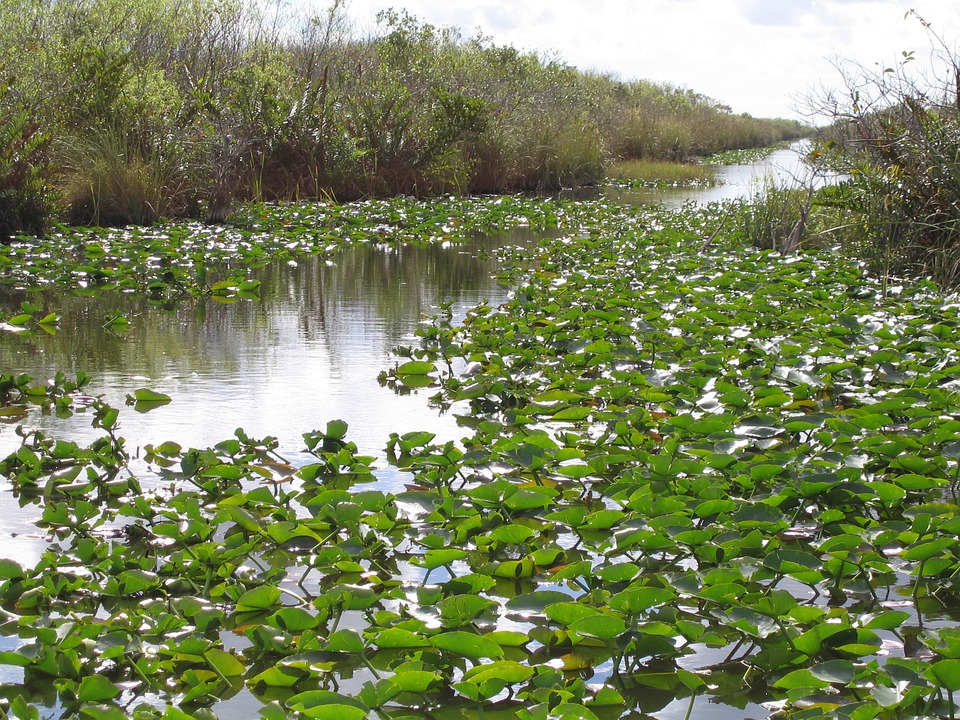 As sea levels continue to rise, more areas of the coastal Everglades will be susceptible to salt water intrusion, according to a new study by Florida International University. Sea levels rose 2.2 centimeters annually from 2011 to 2015, according to scientists in FIU's Southeast Environmental Research Center and FIU's Sea Level Solutions Center. In 2012, sea levels rose 10 centimeters in the dry season months of December to May and have not subsided. Everglades, representative image, source: PixabayMany factors contributed to the drastic increase in 2012, including melting ice sheets, a strong La Niña season in 2011, and slow ocean currents that allowed sea water to pile up along coastlines. Parts of the coastal Everglades that were once flooded by sea water about 70 percent of the time are now covered by sea water 90 percent of the time. "Salt water intrudes farther inland when there is a small difference between Everglades fresh water levels and sea level," said Shimelis Dessu, postdoctoral research associate in the Southeast Environmental Research Center and lead author of the paper. "Salinity is an indicator of the coastal Florida Everglades' health." Tamiami Trail, which connects Tampa to Miami, prevents the natural flow of water in the Everglades from north to south. Resource managers release fresh water into the Everglades during the wet season from June to November, an effective tactic in fighting salt water intrusion when sea levels are highest. But salt water can move inland during the dry season when fresh water is not released into the Everglades. The Comprehensive Everglades Restoration Program was created by the U.S. Congress in 2000 to restore water flow. But sea level rise was not taken into account when the program was developed. "We need to fight water with water," said Rene Price, chair of FIU's Department of Earth and Environment and co-author of the study. "To combat sea level rise in the Everglades, we recommend additional fresh water be delivered throughout the year, not just in the wet season." The coastal Everglades is a delicate ecosystem that depends on the right balance of fresh water and salt water to stay healthy. Nestled in between marine and land environments, it is vulnerable to sea level rise because of its low ground level, loss of peat soil, tides and flooding, and excess marine nutrients. The scientists relied on data collected by the Florida Coastal Everglades Long-Term Ecological Research (FCE-LTER) Program. Housed at FIU and funded by the National Science Foundation, the FCE-LTER Program studies how water, climate and people affect the Everglades. "The research brings into focus the challenges resource managers face as environmental changes accelerate," said John Schade, director of a National Science Foundation Long-Term Ecological Research program. "Long-term research like this is critical if policy-makers and managers are to effectively adapt strategies for protection of freshwater resources to new realities." The study was published in  Journal of Environmental Management . FIU's Southeast Environmental Research Center and the Sea Level Solutions Center are housed in FIU's Institute of Water and Environment, which is dedicated to addressing global water and environmental issues. More information:  Shimelis B. Dessu et al. Effects of sea-level rise and freshwater management on long-term water levels and water quality in the Florida Coastal Everglades,  Journal of Environmental Management  (2018). DOI: 10.1016/j.jenvman.2018.01.025  Journal reference:  Journal of Environmental Management Source: FIA (via Phys.org)