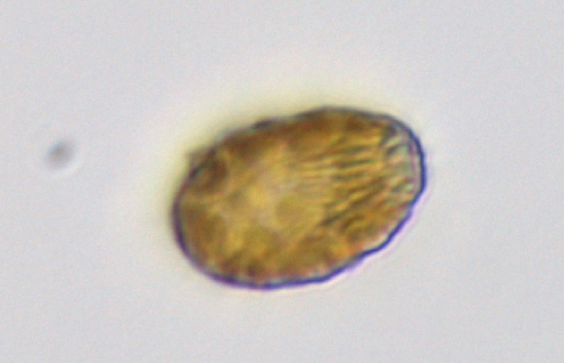 A bloom of a harmful algal species that causes a different red tide than what is currently affecting Florida’s east and west coasts has been found in the Florida Keys, according to FIU researcher Tom Frankovich. Unlike the Karenia brevis species, the toxins produced by the observed algae in the Keys are not associated with human illness but have been associated with fish kills in southeast Asia and illness of seals in the North Sea. Microscope image of Fibrocapsa japonica, the algae discovered in a Florida Keys canal last week. Source: FIU “It’s not something to be alarmed about right now,” said Frankovich, a research associate professor with the Institute of Water and Environment who works out of Key Largo. “This particular algae is a natural part of the environment and often forms harmless blooms with no noticeable effects on marine life, but it has the potential to cause fish kills if it persists for long time periods.”. Frankovich emailed photomicrographs of the phytoplankton to Carmelo Tomas, a biology professor emeritus at the University of North Carolina at Wilmington who specializes in phytoplankton. He confirmed the findings. The discovery was an unexpected turn of events for Frankovich, who was working on a report about red tide monitoring plans on the morning of Oct. 2. Right after sending the report to his colleagues at FIU, he stepped outside to stretch his legs. That’s when he met a local resident who stopped by the Key Largo lab saying he had red tide in his canal. Frankovich was skeptical, but his curiosity was piqued. He agreed to grab a water sample from the residential canal located in the Pirate’s Cove subdivision in Key Largo and take a closer look through the microscope. At the lab, he was expecting to find purple sulfur bacteria, which has been found in Key Largo canals in recent years. But when he looked through the microscope, he was surprised to find a photosynthetic flagellate, signaling to him he was looking at specimens of a specific group of algae. Noting its swimming behavior, size and color he was able to narrow the search to a group of flagellate algae known as raphidophytes. Eventually, he was able to reveal the flagellate’s identity — Fibrocapsa japonica by the presence and location of unique cellular features known as mucocysts located on the posterior end of the cells. The species is known to occur in organically-enriched, enclosed environments, conditions characteristic of residential canals with little water circulation. Frankovich notified county and state agencies the same day and sent additional water samples for further confirmation and enumeration to the Harmful Algal Bloom laboratory of the Florida Fish and Wildlife Commission (FWC) to conduct additional testing. FIU has a substantial and growing presence in the Florida Keys, with around 25 full-time FIU employees stationed from Key West to Key Largo. FIU is engaged in research, education, and ecosystems management programs in Monroe County. “Having skilled and experienced research staff in the Keys provides the ability for us to quickly address local emerging environmental issues and communicate that research to local residents and government authorities,” said James Fourqurean, director of FIU’s coastal oceans research programs in FIU’s Institute of Water and Environment. “Without observant homeowners and experts like Dr. Frankovich, it is likely that this bloom would have escaped notice or been mistaken for a bloom of the Florida Red Tide algae.” Frankovich specializes in estuarine ecology. In recent months, he has also served as a volunteer for the FWC’s research institute in St. Petersburg, collecting water samples in the Florida Keys and southern Everglades. Source: Florida International University