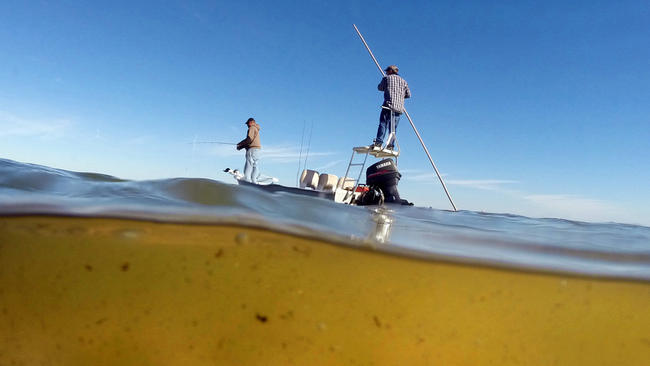 Central Florida's Indian River Lagoon, North Florida's Apalachicola Bay and a trio of coastal estuaries in South Florida are in the throes of ecosystem collapses that threaten sea grass , fisheries, recreation and local economies What's to blame? A historic toll of chronic pollution and crippled drainage has been compounded by drought in recent years and El Niño downpours this winter. The troubled environments are far apart, but their stories are similar and even intertwined. Health of the Indian River Lagoon along Volusia and Brevard County was mauled earlier this decade by "super blooms" of green algae and an infestation of brown algae. The onslaught killed a combined area of sea grass twice as large as Titusville and was linked to deaths of manatees, dolphins and pelicans. After a lull, algae is smothering the lagoon again, but the timing is unusual; such rampant algae ordinarily occurs in summer. Officials suspect heavy winter rains delivered a gush of polluted storm water to a lagoon already in critically poor health, feeding the algae invasion. "There is no place in Brevard County that has clean water," fishing guide Alex Gorichky said. "If you look in the water as a client would, it's all brown as hell." In south Volusia County, the lagoon encompasses Mosquito Lagoon, famed for clarity but now opaque with algae. Bob Chew, an area resident from Rhode Island, said he is preparing a talk for Rhode Island Saltwater Anglers Association, explaining the previously fabulous Mosquito Lagoon is ruined. "I will have to tell them to find another place to fish," Chew said. Florida Bay Florida Bay is a vast estuary adjoining Everglades National Park at the state's southern end. When thriving, it nurtures the rich sea life of the Keys. But past months have been dismal for Florida Bay; thousands of acres of sea grass have been decimated by hyper-salty conditions. Before Florida's development, the bay was reliably hydrated by rain draining gradually across the state from as far as Orlando at the Everglade's north end. After decades of slicing up the Everglades, creating land for cities and sugar cane, far less fresh water arrives, coming mostly from rain on Everglades park. When drought parched the park last year, bay salinity intensified to twice that of seawater. Steve Davis, ecologist at Everglades Foundation, said chemistry turned lethal for sea grass, setting up a major die off that could play out for years. While this winter's El Niño downpours delivered fresh water to the bay, Davis and others fear that decomposing sea grass will nourish an outbreak of thick algae that kills more sea grass. Caloosahatchee River Many Fort Myers Beach locals working at restaurants, hotels, charter services and other businesses turn livid when asked about polluted waters. Lindsay Carpenter, manager of beachfront Beacon Motel, pulled out her phone to flick through social-media photographs of brown water pulsing into the Gulf of Mexico. "It's disgusting," said Carpenter, who, like others, fears word is beginning to spread among visitors not to come. "This is our busy season; this is when we earn our livelihoods." Winter's heavy rain that filled Lake Okeechobee prompted authorities to ease stress on the huge lake's imperiled dike by dumping billions of gallons daily into a pair of man-made outlets. One of those is the channelized Caloosahatchee River that leads to the Fort Myers area. Decades ago, the lake would have overflowed into the Everglades. But sugar cane now blocks that natural outlet. Today, muddy water dumped from Okeechobee into the Caloosahatchee roars through gates at three dams, fouling estuary at Sanibel and Captiva islands on the way to the Gulf of Mexico. Surf at Fort Myers Beach has coffee-and-cream color. "It's nothing short of a BP disaster," environmentalist John Heim said, referring to the oil spill. "There's an elephant running down our beaches and it's the Lake Okeechobee discharges." St. Lucie River Stuart-based Rivers Coalition has 70 homeowner, recreation, industry and environmental groups dedicated to its "Stop the Discharges" slogan. Those discharges are from the east side of Lake Okeechobee, surging into the St. Lucie Canal, which drains to the estuary of St. Lucie and Indian rivers at Stuart near the Atlantic Ocean. Years of periodic discharges have smothered oyster beds and grass flats with ooze. "The water quality, pardon my French, is crap," said Mark Perry, Florida Oceanographic Society director, trembling with anger while addressing the coalition recently about extraordinarily heavy discharges occurring now. During that gathering, a Martin County official played a promotional video promising "our beaches are still safe." The message was reminiscent of the BP spill, when beach communities saw tourism plummet. Watching Okeechobee's muddy water spout through openings at St. Lucie Dam, Bert Haese, a retiree who lives near the river, said, "it's terrible." "You can't swim in it, fishing is no good and they don't want you to even touch the water," Haese said. Apalachicola Bay Apalachicola Bay's death spiral turns on too little water coming down the Apalachicola River from as far as thirsty Atlanta despite years of urging by Florida officials and environmentalists for greater flows. With too little water, Apalachicola's web of life, from crayfish to red fish, limps along. When drought hits, the bay becomes far saltier for far longer than oysters, crabs and shrimp can tolerate. Drought a decade ago staggered famed oyster production, shrinking it by 80 percent. Another drought this decade was worse, said Dan Tonsmeire, head of Apalachicola Riverkeeper advocacy group. "What's left isn't none but almost," he said. "People have left because they can't make a living." Rain that boosts flow in the river is often healthy for the bay, but this winter's downpours brought authorities to close the little oyster harvesting still being done because of excessive bacteria. Now talked about in the community is an extended closing of the bay for recovery, Tonsmeire said. Source: Orlando Sentinel