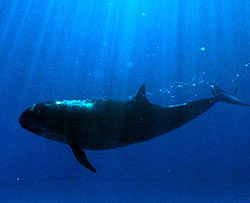 By the time rescuers returned to a mass stranding of false killer whales on the remote coast of Southwest Florida, most had died overnight. At least 82 false killer whales died; National Oceanic and Atmospheric Administration The U.S. Coast Guard first confirmed the mass stranding of nearly 100 false killer whales near Hog Key in Southwest Florida after a caller alerted state wildlife officials on Saturday, Jan. 14. By the time rescuers returned to a mass stranding of false killer whales on the remote coast of Southwest Florida early Sunday, most had died overnight, their corpses now drawing aggressive, and hungry, bull and tiger sharks. With waters too dangerous to enter and chances of survival unlikely, the team turned their attention to unraveling what caused the mysterious deaths, now the largest stranding on record in the state. On Tuesday, Erin Fougères, the program administrator for the National Oceanic and Atmospheric Administration’s Southeast stranding network, said rescue teams completed full necropsies on six of the whales, performed partial dissections on others and collected tissue samples from nearly all of the 82 whales found dead. Another 13 remain missing. In the upcoming weeks, pathologists will look at blubber, skin and tissue from the whales’ organs to try to understand what drove so many into the brown, turbid waters near Hog Key and just north of Lostmans River, a location about as remote and wild as any left in the state. There’s a lot of different factors that could potentially cause it,” said Fougères, listing changes in tide or unusual weather, water conditions like red tide, or military sonar exercises blamed for killing beaked whales. The strong social bond shared by the whales could also be their undoing: healthy whales often follow the sick. Of all the different species, false killer whales also hold the record for the largest whale stranding ever, Fougères said. False killer whales near Hog Key in Southwest Florida; National Oceanic and Atmospheric Administration The Gulf of Mexico is routinely plagued with red tide outbreaks, with moderate to high amounts detected just this month far to the north. Over the last week, the state also began investigating a mysterious string of pelican deaths, leading U.S. Rep. Charlie Crist to ask the Environmental Protection Agency to test waters for toxicity in a letter Tuesday. Fougères said it was unlikely the deaths are related. In Florida, false killer whales remain an enigma, air-breathing mammals that live miles offshore in the Gulf of Mexico, where they dive nearly 900 feet in search of tuna, octupuses and other deep-sea marine life to eat. The last time the Gulf whales were surveyed in the 1990s and early 2000s, fishery experts put their numbers between about 700 and a thousand. But today that information is considered too outdated to be valid, so government assessments list the herd as “unknown.” BY JENNY STALETOVICH Read full article at: Miami Herald