Polluted Lake Water Is Making It's Way Toward Florida Beaches 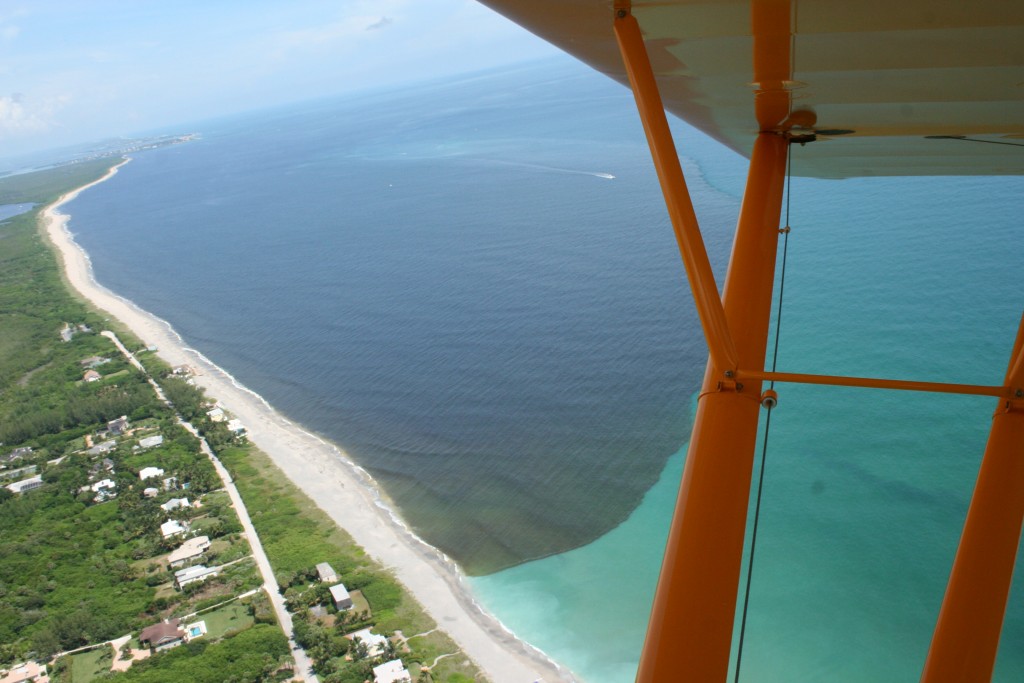 With tourist season just around the corner, Florida’s beach communities would normally be preparing for a happy, healthy summer. Instead, they’re reeling from polluted water that is likely to inflict severe damage to the local economy and environment

Lake Okeechobee, a large inland lake in southern Florida, is experiencing its highest water levels in nearly a century due to heavy rains that fell during the month of January. This should not be suprising, because heavy rainfall events are increasing as the planet warms. But after water levels reached a foot above normal, public officials began to worry that the excess water was putting too much stress on the lake’s aging dike. Officials then made the decision to drain the lake out toward Florida’s coasts. There was one problem: Lake Okeechobee’s waters are toxic.

Local industry has long been using Okeechobee’s waters as a dumping ground for an assortment of chemicals, fertilizers, and cattle manure. David Guest, managing attorney of the Florida branch of the environmental law group Earthjustice, called the lake a “toilet.” While the pollution was once confined to the lake, it now flows toward Florida’s coastal communities via local rivers. The water, which is flowing out of the lake at 70,000 gallons per second, will soon pollute the ocean waters in the Gulf of Mexico and the Atlantic Ocean.

This pollution has immediate consequences for southern Florida’s environment and economy. The untreated water contains toxic chemicals and fertilizers that are harmful to local flora and fauna, and the fertilizers and chemicals found in the water are known to cause algal blooms, which are known to poison shellfish and make life difficult for the marine food chain. Dawn Shirreffs, a senior policy adviser at the Everglades Foundation, told ThinkProgress that there have been reports of dead fish being found along the coastline. This is especially concerning since many species will migrate to Florida to seek comfortable water temperatures this time of year.

The local economy, much of which is driven by tourism, will also be negatively affected by the polluted lake water. In 2013, the last time a significant water discharge occurred in southern Florida, locals dubbed the season the “lost summer,” due to the downturn in tourism and beach-going as a result of the polluted coastal water. In 2015, FloridaRealtors, a trade organization representing the Florida real estate industry, commissioned a study assessing the impact of water pollution on home values in Martin County, Florida. The results were alarming. During the “lost summer,” aggregate real estate value fell half a billion dollars, as potential buyers were reluctant to buy or invest in property that was near water that was both toxic and objectively disgusting.

Furthermore, as sea levels rise, many Floridians are right now coping with coastal flooding even when it isn’t raining. Cities like West Palm Beach, which sits between the south of the lake and the Atlantic Ocean, have faced increased flooding due to higher sea levels. Adding polluted lake water to the mix makes this even more of a problem. It’s also a problem for the tens of thousands of sharks that would normally be farther south off the coast of Miami — but this year are off the coast of Ft. Lauderdale. They appear to be doing this because the water is warmer — which puts them closer to the polluted lake water.

Immediate solutions are hard to find. Unfortunately, given the immense pressure on the lake’s infrastructure due to the excess precipitation, there is no other option but to discharge the toxic water to the ocean. John Campbell, a spokesperson for the U.S. Army Corps of Engineers, said the water could not be diverted south of the Everglades right now because Lake Okeechobee’s water levels are just too high.

Speaking to ThinkProgress, the Everglades Foundation elaborated on current efforts by local, state, and national officials to secure funding for new infrastructure that can help prevent this from occurring in the future. Current proposals include the Comprehensive Everglades Restoration Plan and the Central Everglades Project. Dawn Shirreff, of the Everglades Foundation, said these plans have high levels of support.

In the meantime, those affected by the lake discharge are raising awareness and taking action. Mayors and local officials are calling on Florida Governor Rick Scott to issue a state of emergency, and a delegation of mayors and activists traveled to Capitol Hill on Monday to ask federal lawmakers for help. Last Friday, Senator Bill Nelson (D-FL) toured Lake Okeechobee with water experts and the Lt. Colonel of the Army Corps. of Engineers. Nelson said the lake discharge was “idiotic,” and is currently working on getting bipartisan support for funding to remedy the situation. Tourists and locals are posting pictures of the dirty water on social media, hoping to raise awareness, and a local activist group called “River Kidz” organized a protest along the St. Lucie River on Sunday.