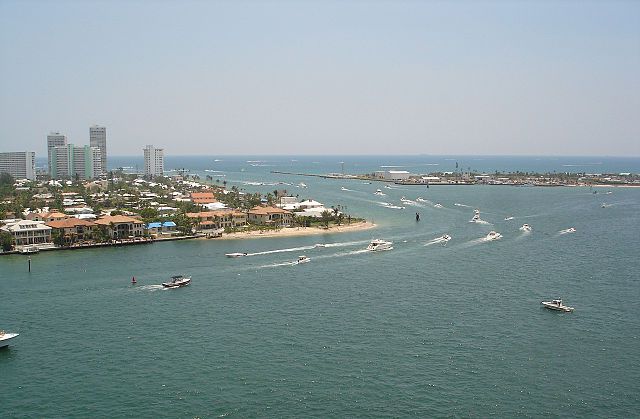 Assistant Secretary of the Army for Civil Works Jo-Ellen Darcy signed the Record of Decision for the Port Everglades Harbor Navigation Study Jan. 29, 2016, signifying the completion of the final administrative review for the project’s report The report passed the Office of Management and Budget (OMB) review and was transmitted to Congress Jan. 29, 2016. The project will compete with other investments for funding in future budgets. The submission marks a significant milestone for the Port Everglades navigation improvement plan, which includes deepening and widening the harbor. Major national benefits of the project include transportation cost savings and increased economic efficiency. The Corps estimates over the lifecycle of the project about $2.90 is earned for each dollar spent in improvement, equating to an estimated average annual net benefit of more than $31 million. “Achieving this milestone validates our Jacksonville District team’s extraordinary work to improve critical navigation infrastructure and provide economic benefits to Florida and our Nation,” said Col. Jason Kirk, U.S. Army Corps of Engineers Jacksonville District Commander. The state of Florida has contributed over $850 million in grants to Florida’s seaports since 2011. According to a Florida Department of Transportation (FDOT) letter to the Chief of Engineers, Lt. Gen. Thomas Bostick, the state’s contributions are combined with matching funds to expand and improve Florida’s seaport infrastructure to maintain and grow a diversified, capable, resilient, and geographically dispersed port system for the benefit of the entire nation. “FDOT is committed to continue to partner in port investments that create jobs, boost local economies and ensure Florida seaports remain a viable and competitive component of the nation’s maritime assets,” FDOT Secretary Jim Boxold stated in the letter. “This is a major milestone that now allows us to seek federal funding for construction and move this critical project forward to accommodate the Post-Panamax ships that are already coming to Port Everglades today. As vessels continue getting larger, deeper and wider channels are needed for safe passage and to reduce ship traffic congestion,” said Port Everglades Chief Executive & Port Director Steven Cernak. “I commend Assistant Secretary Darcy and her staff at the U.S. Army Corps of Engineers for recognizing this need and taking the initiative to advance this project. Our port stakeholders have the business need to support this project and consider it a matter of great importance,” he said. The configuration of the current Federal project dates back to the 1970s, making it difficult to accommodate the larger Post-Panamax container vessels and the tanker vessels of today. Navigation is further challenged by strong and unpredictable cross currents at the outer entrance channel. These currents can exceed 5 knots and unpredictably change directions, resulting in vessel delays of hours to days while vessels wait at anchor for better conditions. “We now have an opportunity to reduce transportation costs and help bring in the forecasted volume of goods into the harbor on fewer, larger and more efficient ships,” said Corps Project Manager Lacy Pfaff. The harbor improvement plan includes deepening the inner entrance channel, main turning basin, Southport Access Channel and turning notch from 42 to 48 feet; deepening the outer entrance channel from 45 to 55 feet; and, widening select areas. The estimated project cost is $381 million cost-shared between the federal government and Broward County. Since 2013, the Corps has continued consultation with state and federal agencies regarding endangered species listings and refining the mitigation and monitoring plans. The Department of Commerce National Marine Fisheries Service issued a biological opinion March 7, 2014, determining that the project will not jeopardize the continued existence of federal listed species. The estimated cost of the project’s mitigation and monitoring is approximately $54 million. Jacksonville District received investigation funds to start the pre-construction, engineering and design phase, which will take approximately two years with steady funding. The construction phase could take an additional five years, or more, Pfaff said, depending on the funding stream and phasing of the work. Source: Florida Water Daily