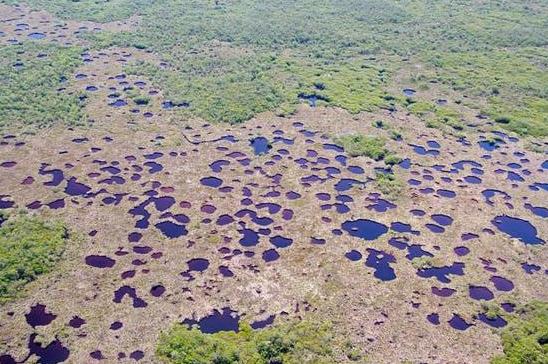 Saltwater intrusion in the Everglades may have caused potholes to form in the soil where grass has died. Photo courtesy of Everglades Foundation

ORLANDO, Fla., June 24 (UPI) -- Large areas of Florida's Everglades could be underwater by the time a multibillion-dollar plan to restore the region is finished, according to a University of Maryland researcher. But that might only make the plan more urgent, researchers and advocates said.

At stake is not only a national park and a home to unique wildlife, but also a flow of fresh water through South Florida that helps to replenish drinking water aquifers for the Miami area -- home to millions of people. If rising seas doom a plan to restore the area, all of that could be threatened.

Some argue the plan is becoming obsolete because of rising seas, others say the plan is needed more than ever. It addresses the health of coastal wetlands, a barrier against storm damage, and toxic algae events that menace central Florida. President Donald Trump recently agreed to support an increase in Everglades funding to $200 million for this year.

"Some scientists believe that Florida will be about 50 miles shorter by 2050, so the peninsula will actually end at Tamiami Trail by the time this restoration is finished," Nuttle said.

Others don't believe restoration plan should be updated, said René M. Price, chairwoman of the Department of Earth and Environment at Florida International University in Miami.

"The last thing I'd want would be for them to stop and try to update" the restoration plan, Price said. "That document is 20 years old. I think they need to focus on really letting the water go, to flow through the Everglades."

Shannon Estonez, chief operating officer of the non-profit Everglades Foundation, agreed that restoration plans should use the best and current numbers for sea level rise. But she said all the research done on the Everglades indicates that more flow of fresh water to the south will help combat the effects of higher seas.

"It's about creating a sustainable ecosystem, to reverse the degradation of the Everglades," she said. "If you don't restore the ecosystem, the impact of sea-level rise is going to be worse."

She said Shark River Slough, a low-lying area southwest of Miami, could be underwater if seas rise and nothing is done. But with a flow of fresh water, the native Everglades plants will survive and help to hold back the ocean.

"The whole point is that when you restore fresh water flow to the south, you help offset some of the effects of salt water," Estonez said.

The goal of the comprehensive plan is to bring the area closer to its natural state -- before developers cut roads, canals and farm fields across it. Elements of the plan also address cleaning up polluted runoff from Lake Okeechobee, and sending less lake water into mid-Florida estuaries during the rainy season -- a major cause of fish kills and red tide algae blooms.

Nuttle said the plan as written only anticipated 6 inches of sea level rise by 2050. Now, even the U.S. Army Corp of Engineers anticipates that seas could be 26 inches higher in the region by that time.