State of Emergency - in Florida 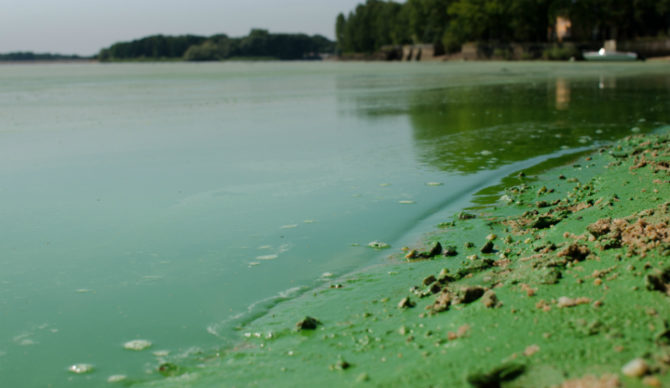 As algae closes beaches along Florida’s Atlantic coast, United States Senator Marco Rubio is calling on President Barack Obama to declare a state of emergency and protect businesses from the bright green deluge. Rubio, who toured the Treasure Coast on Friday, July 1, said he could not think of a precedent anywhere else in the country. According to WBPF News, Rubio was met by protesters at the end of a boat, ground and air tour that landed him on Central Marine at 200 NW Alice Ave. in Stuart, where the algae bloom is especially bad. Protesters held signs blaming “big sugar” for an algae phenomenon massive enough that it closes beaches along the Treasure Coast and Palm Beach County. Responding to the protest, Rubio said that if he believed sugar was the only contributor, he would do everything to stop it. As the algae closes in on beaches vital to Florida’s economy, Rubio proposes the following action plan: Convince the Army Corps of Engineers to completely stop the flow of water for a short period of time to flush everything out, get the governor to ask for an emergency declaration from the president, and get the Centers for Disease Control and Prevention to assess the long-term health risks. Treasure Coast residents have expressed concerns about their health and the health of marine life while the algae surge closes in on their beaches. WPBF reports the problem in some areas to be so bad that the residents are forced to wear surgical masks, and local fishermen are feeling the brunt of the algae’s negative impact on their livelihood. During a news conference, Rubio called the algae’s effect on tourism, home values and small businesses “catastrophic,” as the unwanted bloom closes down normal routine along the beaches. He issued this statement. “I hope the president will have an emergency declaration, because that will open up the full portfolio of aid that the federal government can provide local businesses and communities that are being impacted by this.” The Treasure Coast inspected by Rubio, is a region located on Florida’s Atlantic coast, consisting of Indian River, St. Lucie, and Martin, and up to some extent, Palm Beach County. The Treasure Coast, under duress as algae closes its beaches, was so-named from the Spanish Treasure Fleet lost in a 1715 hurricane, and is a separate tourist destination from Miami and the Gold Coast region. According to Sun Sentinel, the algae presence closes down beaches because of related toxins that can affect the liver, nervous system and digestive system. The fact that rashes, nausea, cramps, diarrhea and vomiting are potential consequences faced by residents, make the shutdown necessary if authorities are to conduct tests to determine whether this strain of algae does contain the deadly toxins. Martin County is suffering the most as massive discharges of algae-laden water from Lake Okeechobee through the St. Lucie River closes beaches and waterways. The added problem of pressure on the lake’s aging dike, which protects lake towns, has forced the Army Corps of Engineers to release water into the Atlantic Ocean and Gulf of Mexico. According to The New York Times, Governor Rick Scott has gone ahead and declared states of emergency in Martin, St. Lucie, Palm Beach and Lee Counties, while Marco Rubio, a Republican, investigates the algae that closes down beaches. A small neighborhood marina and other parts of the St. Lucie River in Stuart, Fla., just inside the Atlantic coastline, has been especially hard hit by the green and blue bloom. The algae gives off a stench so overwhelming that it closes down neighborhoods with many people refusing to go outside as is their custom along the beaches. Marisa Baskin, 31, a lifelong resident of Stuart who works as a social worker at a local hospital, was preparing Friday to stay with friends across town for the weekend just to get away from the algae bloom’s pungent odor that closes down populated areas near the beaches. Baskin told reporters of the woeful situation that has overtaken their small neighborhood marina, from which sailing hobbyists have moved their boats. “Our lives revolve around the water; we have a boat, surfboards, and there’s nothing really to do here without the water. And I think our governor and local politicians are to blame. This isn’t the first time this has happened, but it’s definitely the worst.” Some 30 protestors wearing masks and holding signs, yelled, “we want clean water now!” as they lined Northwest Alice street to point Senator Marco Rubio’s attention toward the algae invasion as it closes down their beaches. The pressure is on him to deliver a solution fast. Source: Inquistir