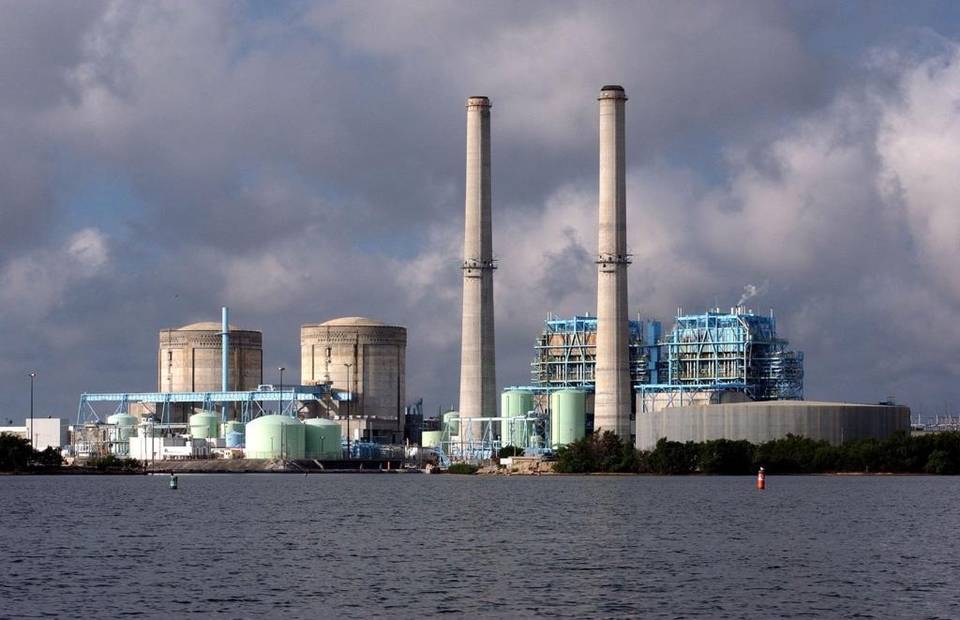 A radioactive isotope linked to water from power plant cooling canals has been found in high levels in Biscayne Bay, confirming suspicions that Turkey Point’s aging canals are leaking into the nearby national park According to a study released Monday by Miami-Dade County Mayor Carlos Gimenez, water sampling in December and January found tritium levels up to 215 times higher than normal in ocean water. The report doesn’t address risks to the public or marine life but tritium is typically monitored as a “tracer” of nuclear power plant leaks or spills. The study comes two weeks after a Tallahassee judge ordered the utility and the state to clean up the nuclear plant’s cooling canals after concluding that they had caused a massive underground saltwater plume to migrate west, threatening a wellfield that supplies drinking water to the Florida Keys. The judge also found the state failed to address the pollution by crafting a faulty management plan. This latest test, critics say, raise new questions about what they’ve long suspected: That canals that began running too hot and salty the summer after FPL overhauled two reactors to produce more power could also be polluting the bay. “How much damage is that cooling canal system causing the bay is a question to be answered,” said Everglades Law Center attorney Julie Dick, who had not had a chance to review the report. “There are a lot more unknowns than knowns and it just shows how much more attention we need to be paying to that cooling canal system.” County commissioners, who have kept a close eye on the canals and objected to the state’s management plan, ordered the additional monitoring of bay water last year. The commission is scheduled to discuss the canals, along with another study by University of Miami hydrologist David Chin examining problems linked to adding more water to the canals, at a meeting Tuesday. FPL officials declined to comment Monday evening. Over the last two years, problems with the canals have worsened exponentially. After the 2013 plant expansion to increase power output by 15 percent, the canals began running dangerously high. FPL officials blamed problems on an algae bloom that worsened after the canals were temporarily shut down during the project. But when a summer drought hit in 2014, temperatures spiked. At least twice, when temperatures soared to 102 degrees, the utility was nearly forced to power down reactors. After obtaining permission from nuclear regulators to operate the canals at 104 degrees, the hottest in the nation, FPL officials began plotting a course to fix the canals by pumping in millions of gallons of fresh water from a nearby canal as well as increasing the amount of water drawn from the Floridan aquifer. But the growing saltwater plume triggered regulatory scrutiny. After the county complained, the state ordered a new management plan, called an administrative order, to address problems.   The Florida Department of Environmental Protection declined to cite FPL for violating state water laws and instead crafted a plan that critics said gave the utility license to continue to pollute. The plan, hastily approved two days before Christmas, was quickly challenged by county officials, as well as environmentalists and rock miners. The county settled its challenge in October after FPL agreed to a series of actions to clean up the plume that included constructing a barrier made up of extraction wells. The utility also agreed to try to use salty water from the Floridan aquifer, rather than freshwater from the nearby canal intended for Biscayne Bay, or treated wastewater from a nearby county sewer plant. The decree also called for increased monitoring that in the fall gave the first indication the canals had leaked into the bay when monitoring detected elevated levels of ammonia and phosphorus. After those findings, staff and FPL returned for another round of tests and to get a better read on what was happening in the bay. Earlier sampling was taken near the bottom of the bay, where researchers expected to find evidence of the groundwater plume that had been documented west of the canals. For the most recent round, water was studied at varying depths. Samplers found that while water at the surface met most county water quality standards, nearly all the standards were exceeded at the bottom. The county also looked for traces of tritium, a naturally occurring hydrogen isotope often found in minute amounts in groundwater but also commonly produced by high energy neutrons in a nuclear reactor. Tritium emits a relatively weak form of radiation that is not considered hazardous at low levels. Over the last five years, the report said, cooling canal water typically has tritium at levels 60 to more than 800 times higher than in the bay. Tritium at the bottom of the bay close to the canals ranged from more than 130 to 215 times higher — high enough to suggest a consistent flow from the sprawling cooling system. County staff concluded the findings are “the most compelling evidence” that canal water has spread into the bay. While the county’s consent decree requires FPL to address the spread, staff said more study is needed to determine exactly what’s going on and come up with a long-term remedy for cleaning up the canals. Source: Miami Herald