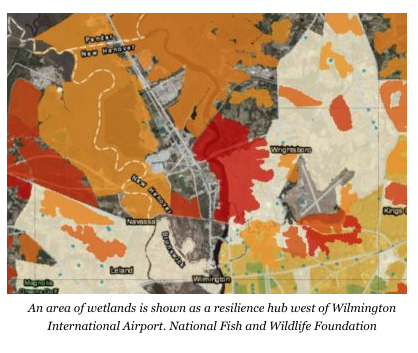 Tool Shows Best Sites For Resilience Projects The interactive Coastal Resilience Evaluation and Siting Tool can be used to make informed decisions about the potential of restoration, conservation or other resilience-related projects. Image: National Fish and Wildlife Foundation This is another in a series of reports on coastal resilience. WILMINGTON – Coastal towns and counties can now access an online tool that pinpoints areas where resiliency projects would best help communities in the face of storms, floodwaters and rising seas. The National Fish and Wildlife Foundation earlier this month released its Regional Coastal Resilience Assessment along with a new Coastal Resilience Evaluation and Siting Tool, or CREST, that identify and rank potential project sites along the Atlantic, Gulf of Mexico and Pacific coastlines in the lower 48 states. Mandy Chesnutt The assessment uses standardized, nationwide data that establishes an apples-to-apples comparison when it comes to evaluating potential resiliency projects, explained Mandy Chesnutt, NFWF’s director of program operations. CREST takes the initial guesswork out of potential project areas by identifying so-called “resilience hubs.” These hubs are areas of open space that surround dense population centers, are immediately accessible to infrastructure and host natural resources and habitats that provide protection to humans. They are also areas that are at the highest risk of flooding from coastal storms and sea level rise. “It is one tool in our arsenal,” Chesnutt said. “The assessment is a starting point. It can give you a few of these hubs that you can go and check out. What we’re saying is, ‘use this tool as a starting point. You need to go out and investigate these places.’” What makes NFWF’s assessment unique is that it targets areas where both humans and wildlife would receive the most benefit from natural resiliency projects, such as living shorelines and wetlands restoration. Researchers, including those with the University of North Carolina Asheville’s National Environmental Modeling and Analysis Center, the National Oceanic and Atmospheric Administration and NatureServe, delved even deeper to identify potential project sites through targeted watershed assessments. North Carolina’s Cape Fear watershed is among eight coastal watersheds from Maine to Florida and California included in the targeted assessment. The Cape Fear watershed in 2015 was the first to be evaluated. Resilience Hubs ranked by the sum of the average value in both the Community Exposure Index and Fish and Wildlife Index. Higher ranking indicates higher priority. Source: National Fish and Wildlife Foundation This watershed supports more than a third of the state’s population – more than 2 million people – and stretches through nearly 30 counties and 114 municipalities, including Greensboro, Fayetteville, Durham, Chapel Hill and Wilmington. The Cape Fear watershed is home to a wide array of habitat that supports juvenile fish, crabs, shrimp and a host of migratory fish as well as some of the oldest cypress trees in the world. This was the testing ground on how to develop resilience assessment models, identify resilience hubs and rank those hubs. SOURCE TO COMPLETE ARTICLE ABOUT COASTAL RESILIENCE TOOL