Underground Mix of Fresh and Salt Water in South Florida 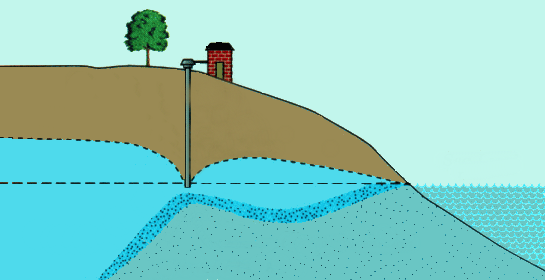 The journal 'Science' published a new study showing that 9 percent of U.S. coastal areas are susceptible to a contaminated underground mix of fresh water and salt water, including southeastern Florida.

The study features the first map of underground water flows ever developed. The technical name for these flows is “submarine groundwater discharge.”

These flows bring fresh groundwater beneath the United States into contact with salt water from the oceans.

Southeastern Florida, Southern California and Long Island, New York, are among the metropolitan areas with water supplies at risk of contamination by seawater, the study found.

The study "removed the cloak from hidden groundwater transfers between land and sea,” said hydrologist Cedric David of NASA's Jet Propulsion Laboratory, which was also involved in the research.

The study found that 9% of the U.S. coastline —   including southeastern Florida,Southern California and Long Island, New York — have water supplies that are susceptible to seawater contamination. This is especially concerning in places like California, which has begun to use more groundwater with surface supplies running low during the state's devastating drought.

On the other side, 12% of the coast, including the northern Gulf Coast, northern Atlantic Coast and Pacific Northwest, is where the ocean is most at risk of freshwater contamination from septic tanks and fertilizer runoff.

The study includes the first-ever map of the underground flows — technically known as "submarine groundwater discharge" — that connect fresh groundwater under the U.S. and seawater in the surrounding oceans.

“We hope others will use our analysis to better plan strategies for coastal land development and groundwater management that help preserve water quality,” Sawyer said.

“Right now, we’ve created a map of American coastlines that highlights some previously known as well as unknown areas of vulnerability along the U.S. coastline, but we hope to be able to do it for the world shortly, as data become available,” she added.